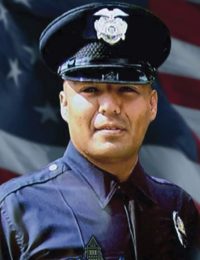 Born in San Luis de Custique in the Mexican state of Zacatecas, Val Martinez was an energetic child who loved playing with marbles, toy cars, and wooden tops. His mother immigrated to the United States when he was young, moving first to Watsonville and then settling in Delano, where his mother remains today. Val attended various public school before graduating from Delano High School. He then went on to study criminal justice in college and applied to be a law enforcement officer shortly after becoming a US citizen.

Val was initially hired as a correctional officer in Salinas, before being accepted as a LAPD officer. He was sworn in on April 30, 2007, and spent all 13 years of his career in the San Fernando Valley, first as a probationary officer in Reseda, then as a full-time officer in Mission Hills. In March 2013, he received a life-saving medal for providing care for a passenger who was having a medical emergency. He received over 70 commendations, including one from a young man he arrested.

After joining the Los Angeles Police Department, he met and fell in love with fellow officer Megan Flynn. It took only two hours for them to realize that they would be more than partners at work. Together they traveled, finding new adventures in cities across the country.

While not serving his community as a police officer, he volunteered with his church Real Life in Valencia building homes in Ensenada. His church and his faith played a large role in Val’s work as an officer. He was baptized a second time as an adult and looked forward to raising his children with the same faith his mother instilled him.

Val often credited his faith for teaching him to always find common ground with other people, whether that be a victim, an arrestee, or a civilian. He had a knack for finding a way to comfort people while treating them with respect and dignity. Val often found himself helping out the “lost sheep” who just needed a bit of extra care.

Police Officer Valentin Martinez passed away July 24, 2020, due to complications from COVID-19. He is survived by his domestic partner Megan and their twin sons who were born shortly after his death; his mother Maria; his father Ricardo, Sr.; brothers Ricardo, Navor, and Juan; and sister Diana Martinez.

Val will be remembered for his love of his mother’s cooking and obsession with the Boston Red Sox, but even more so for his easy-going sense of humor. He really was one of the good ones.