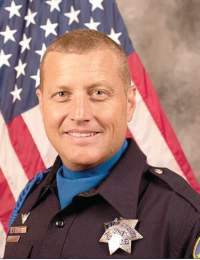 On the morning of January 21, 2022, at 0514 hours, the California Highway Patrol received a call of a wrong-way driver on Highway 99 near 47th Avenue in Sacramento. The calls indicated the driver was traveling northbound in the southbound lanes of Highway 99. The CHP’s South Sacramento Division was in response.

At approximately 0515 hours, Officer Ty Lenehan of the Elk Grove Police Department was riding his department-issued fully marked Elk Grove Police motorcycle in the number 1 lane of southbound Highway 99 near 12th Avenue. The roadway has a small crest and slight curve near the pedestrian bridge at 12th Avenue. Officer Lenehan was struck head-on by a late model Dodge Challenger and ejected more than 100 feet from his motorcycle. Another motor officer from another jurisdiction arrived at the collision site within 30 seconds and began lifesaving efforts on Officer Lenehan. Emergency responders from the CHP and Sacramento Metro Fire arrived expeditiously and continued lifesaving efforts, but tragically were unable to revive Officer Lenehan.

The driver of the Dodge Challenger attempted to flee the scene on foot but was apprehended by CHP officers when he was spotted hiding behind the concrete center divider.  The driver was found to be under the influence of alcohol and depressants. His preliminary BAC was .15 at the scene. He was on California DUI Probation from a previous DUI in 2017. He was arrested and booked on charges of vehicular homicide and DUI.