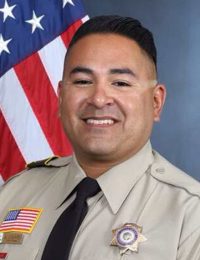 Armando Cantu, known fondly as Mando and Junior to close friends and family, was born in San Diego, California, before moving to Texas as a child. As everyone who knew him would attest, his Texas pride was incomparable. After graduating from Conroe High school in 1997, Armando enlisted in the United States Marines Corps.

Armando served in the Marine Corps for eight years, including a tour in Iraq during Operation Iraq Freedom. He trained at Ft. Lenard Wood and was stationed in Twentynine Palms. Armando remained dedicated to his fellow veterans. In February of 1999, Armando married the love of his life Beta Ka’Shaun. They first met in seventh grade and were inseparable ever since.

In 2001, Armando’s life was forever changed when he gave his life to Jesus Christ. Armando answered the call of ministry and faithfully served in various auxiliary ministries within the church community. Armando became a member of The True Vine Fellowship Ministries in 2001, where he served on the board of trustees, volunteering with the men’s Higher Life outreach program and as an active parent volunteer for the youth department, and mentoring fellow veterans in the Armor of God program. In 2007, he was ordained as an Elder. Armando truly loved spreading the gospel and actively found ways to help his fellow veterans follow in his faith.

Armando joined the San Bernardino County Sheriff’s Department on April 21, 2007. Upon graduating with the 168th Academy Class, Armando was assigned to the West Valley Detention Center and the Central Detention Center. In 2008, Armando was assigned to the Morongo Basin Station and spent time on patrol and as a juvenile deputy. The Morongo Basin Station is a tight-knit community and working as a deputy there meant joining the family. And Armando stepped up to the challenge to serve with his brothers and sisters of the Sheriff’s Department.

Attending classes while working as a Deputy, he graduated from Kaplan University with a degree in Criminal Justice. Then in 2018, Armando was promoted to Detective and assigned to Yucaipa Station. In 2019, he was assigned to the Narcotics Division where he worked in the DEA Task Force and on the Marijuana Suppression Team.