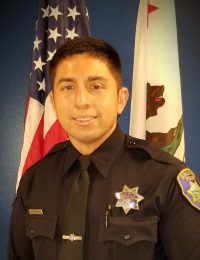 At approximately10:41pm, on Friday, February 25, 2022, Salinas Police Officer Jorge David Alvarado conducted a traffic stop in the area of Market and Griffin Streets. During the stop, a subject opened fire on Officer Alvarado and he was fatally shot. Officer Alvarado’s heroic action during the confrontation directly led to the arrest of the suspect. Salinas Chief of Police Robert Filice stated, “The officer stayed in the fight all the way to the end. Ultimately, he paid the price for it. He gave his life for it. But thanks to his actions, we were able to apprehend the suspect, and we currently have him in custody.

Officer Jorge David Alvarado, age 30, was a five-year veteran of the Salinas Police Department and a U.S. Army veteran. He had previously served with the Colma Police Department for four years. He is survived by his fiancee and his mother.