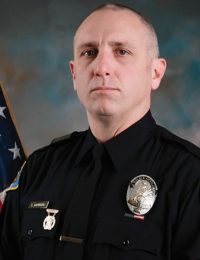 At approximately 4:00am on Tuesday, October 28, 2014, Pomona SWAT Officer Shaun Diamond was participating in a multi-agency, multi-location operation targeting motorcycle gangs. Officer Diamond was one of several officers serving a search warrant and making entry on a home in the 100 block of San Marino Avenue when an interior door opened and they were met with gunfire. One shot was fired from a shotgun, striking Officer Diamond. His fellow officers did not have a clear shot at the suspect and the suspect’s father was in the line of fire. It immediately became a rescue operation to get Officer Diamond medical attention. The suspect was later taken into custody.

Officer Diamond was rushed to Huntington Memorial Hospital in Pasadena, where, despite exhaustive life-saving efforts, he succumbed to his injuries at 3:24am on Wednesday, October 29, 2014.

Officer Diamond, age 45 and a 16-year law enforcement veteran, was working as part of a task force involving Pomona and Montebello police and sheriff’s deputies. Officer Diamond began his law enforcement career with the Los Angeles Police Department, then joined the Pomona Police Department in 2006. He joined the SWAT team in 2008. He is survived by his wife and two children.