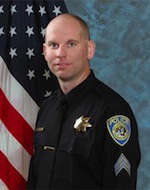 Donations for the Smith family can be made at any Wells Fargo Bank to Account #5148561086, under Kellie Smith or they can be mailed to:

At approximately 2:00pm on Tuesday, January 21, four members of BART’s detective unit and several members of Dublin Police and Alameda County Sheriff’s departments, converged on the Park Sierra Apartments, at 6450 Dougherty Road in Dublin to perform a probation search of an apartment belonging to a suspect in several robberies on BART property. The officers began their search by knocking twice on the door, with no response. Several officers then entered the apartment through the unlocked door with weapons drawn, following protocol. Once inside, one of the BART officers fired a single shot from his weapon, wounding BART Detective Sergeant Tom Smith, Jr. Smith was transported to Eden Medical Center in Castro Valley where he succumbed to his injuries. The suspect was not inside the apartment at the time.

Sergeant Smith, age 42, is survived by his wife, also an officer with the department, and their 6 year old daughter. Smith was a 20-year veteran of the BART force with two brothers in law enforcement – one an Alameda County sheriff’s deputy, the other a Newark police officer.