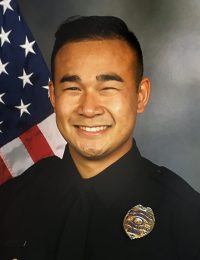 At approximately 9:45am on Tuesday, May 11, 2021, Stockton Police Officer Jimmy Inn responded to a disturbance call in the 4400 block of La Cresta Way. The caller reported hearing screaming, saw a woman with a ripped shirt who was bleeding, and appeared to have been assaulted. Shortly after arriving on scene, Officer Inn was in front of the residence when he was shot by the suspect. Another Uniformed Stockton Police Officer arrived on scene and fired his duty weapon at the suspect. The suspect briefly entered his home and returned moments later holding a young child. The suspect began to strangle the child and refused to comply with the officer’s commands. A community member tackled the suspect and as the officer approached, the officer discharged his duty weapon, striking the suspect.

Officer Jimmy Inn, age 30, was hired by the Stockton Police Department in December 2015 and was currently assigned to the Field Operations Division. He was also a member of the SPD Honor Guard. Officer Inn is survived by his wife, Tela, who is also a Stockton Police Officer, a 7-month-old son, a 12-year-old stepdaughter, and a 14-year-old stepson.