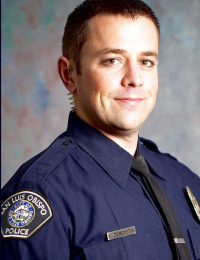 Luca Benedetti was born in San Francisco to Italian immigrant parents and raised in the San Francisco Bay Area. He graduated from Burlingame High School in 2002.  In school he excelled at math, which led him to the Central Coast to attend Cal Poly San Luis Obispo where he studied computer engineering.

While at Cal Poly, he worked as a bouncer at The Library, a bar in Downtown San Luis Obispo.  It was while working there one night in 2006, that his future wife, Grace, walked in; he claimed that it was love at first sight.  They married in February of 2013 and their first daughter was born the following year, followed by their second daughter in 2018.

While attending college, Luca discovered that his true passion was law enforcement.  He attended the Allan Hancock police Academy and following his graduation, Luca began his career with the Atascadero Police Department in 2008.  In 2012, Luca joined the San Luis Obispo Police Department.  During his distinguished career, Luca held assignments as a Traffic Accident Reconstructionist, Range Master, Field Training Officer and Detective; however, his proudest accomplishment was being a member of the San Luis Obispo County Regional SWAT team.

Luca was passionate about enforcing DUI laws and was recognized by Mothers Against Drunk Driving with their Top Cop award for years 2010, 2011, 2012, 2014, 2015, 2017 and 2018.  He was also a “driving force” behind the department staffing a full time DUI Enforcement Officer, a position he was excited to fill.

Luca loved cooking, gardening and home improvement projects.  He took pride in growing much of the food he prepared.  His family, friends and neighbors routinely gathered at the Benedetti home and often around the wood fired pizza oven he built, for homemade food, wine, craft beer and cocktails.

Luca was extremely proud of his Italian roots, not only did he wear a gold necklace of the Italian “boot” around his neck, he also tattooed it on his arm, which included the years that Italy won the World Cup. All of that cooking and appreciation for his heritage centered around family and friends, which were always the most important things in Luca’s life.

On May 10, 2021, while serving a search warrant in the City of San Luis Obispo, Detective Luca Benedetti was tragically shot and killed. He was one of two detectives struck by gunfire that day. Benedetti is survived by his wife Grace, two young daughters Elisabetta and Giovanna, his parents Giampietro and Rita, his sister Carla, and a large extended family.

During his memorial ceremony, Atascadero Police Chaplain Rick Comstock, who officiated Luca and Grace’s wedding, repeated the many accolades Luca received, but he summed him up best with: “We all know that Luca was an accomplished person who excelled in a variety of areas, but of all the things he did, he did daddy best.”