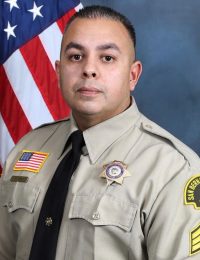 On the afternoon of Monday, May 31, 2021, the Memorial Day holiday, San Bernardino County Sheriff’s Deputies were conducting extra patrol for off-highway vehicle violations in the desert area north of Highway 62 and west of Joshua Tree and Twentynine Palms. At approximately 2:00pm deputies attempted a vehicle stop on a motorcyclist near Paxton Road and Imperial Drive. The rider fled on the motorcycle, leading deputies on a pursuit that ended near Dumosa Avenue and Sunnyslope Drive, where they found the motorcycle abandoned. Deputies approached the motorcycle, not realizing they were walking into an ambush. “The (motorcycle) rider started firing at the responding deputies. One of our deputies was struck by the gunfire,” reported San Bernardino County Sheriff John McMahon.  Deputies returned fire and the suspect died at the scene. The Sheriff’s Department did not immediately release the name of the suspect.

Sergeant Dominic Vaca was airlifted to a nearby hospital, where despite all lifesaving measures, “…the gunshot wound he sustained earlier today was too severe for him to overcome,”  Sheriff McMahon said in a video posted to social media Monday evening. Our prayers are with him and his family as we all mourn this difficult time.”