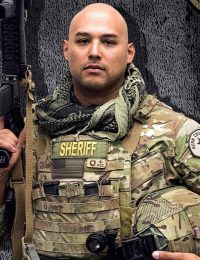 On the afternoon of Sunday, July 25th, at approximately 1:00pm, Deputies from the Kern County Sheriff’s Office responded to a 911 call reporting an armed man, the subject of a restraining order, was at a home near the intersection of 1st Street and Poplar Avenue in Wasco. Screaming and gunfire could be heard in the background of the 911 call.

Responding deputies encountered a woman fleeing the home who stated at least two people inside the home had been shot. The suspect fired at deputies then barricaded himself in the home. The agency’s SWAT team was deployed and a standoff ensued. At approximately 3:00pm the suspect opened fire on members of the SWAT team as they approached the home. Deputy Phillip Campas and another deputy were struck by the gunfire. Both Deputies were transported to a local hospital where, tragically, Deputy Campas succumbed to his wounds.

At approximately 6:28pm, the suspect, armed with an AK-47 rifle and a handgun, climbed onto the home’s roof where he exchanged gunfire with deputies, according to Kern County Sheriff Donny Youngblood.

The suspect was shot and killed in the exchange. Inside the house deputies found three people deceased with gunshot wounds — a woman, age 42, and two males, age 24 and 17. The two male victims were the suspect’s sons, and the woman was their mother, the Sheriff said.

Deputy Phillip Campas, age 35, was a five-year veteran of the Kern County Sheriff’s Office, and a veteran of the U.S. Marine Corps who served in Afghanistan.  He is survived by his wife and three young children, age 6, 9, and 13.