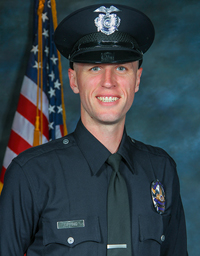 Officer Houston Tipping of the Los Angeles Police Department was working as a bike instructor, participating in a defensive tactics scenario with another officer at the Elysian Park Police Academy, when he fell and suffered a spinal cord injury. Other officers immediately began CPR before he was transported to a local hospital. He succumbed to his injuries on May 29, 2022.

Officer Tipping, age 32, was a 5-year veteran of the LAPD. He is survived by his parents, Shirley and Rich; his stepfather Bob; his siblings Kat and Tyler and his girlfriend, Brittney.