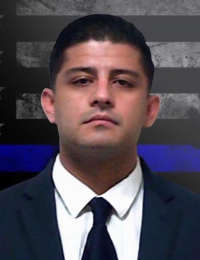 At approximately 4:45pm on June 14, 2022, two officers from the El Monte Police Department responded to a call for a welfare check and possible stabbing at the Siesta Inn in the city of El Monte. Authorities reported the officers confronted the suspect and gunfire erupted inside a motel room. The gunman then fled into the motel parking lot, where more gunfire was exchanged. The gunman was shot and died at the scene and a gun was found.

The two officers were transported to the hospital but, tragically, neither officer survived.

Corporal Michael Paredes, age 42 and a 22-year veteran of El Monte PD, is survived by his wife, daughter, and son. Paredes was posthumously promoted to the rank of Sergeant.

Officer Joseph Santana, age 31, had been with El Monte PD for less than a year having served previously as a Deputy with the San Bernardino Co. Sheriff’s Department for three years. He is survived by his wife, daughter, and twin sons.