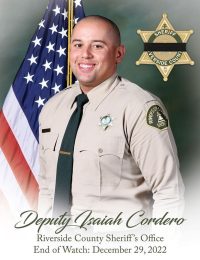 On the afternoon of Thursday, December 29, 2022, shortly before 2:00pm, Deputy Isaiah Cordero with the Riverside County Sheriff’s Office initiated a traffic stop on a vehicle in the 3900 block of Golden West Avenue in Jurupa Valley. As Deputy Cordero approached the vehicle the driver produced a gun and fatally shot Deputy Cordero, then fled the scene. A witness called 911 and nearby residents attempted to assist Deputy Cordero until law enforcement and paramedics arrived.

Law enforcement agencies in Riverside County and San Bernardino County began a massive manhunt for the suspect, identified as William Shae McKay. McKay was located in San Bernardino County and a vehicle pursuit was initiated, eventually returning to Riverside County. A spike strip was successfully deployed on the 60 freeway, but the vehicle continued. The vehicle eventually became disabled on the 15 freeway in Norco and was involved in a single car collision. McKay then fired rounds at deputies who returned fire and the suspect was killed. McKay had an extensive violent criminal history including kidnapping, multiple assaults with deadly weapons, and the stabbing of a CHP K9 in 2021.

Deputy Isaiah Cordero, age 32, was an 8-year veteran of the Riverside County Sheriff’s Office and is survived by his parents.