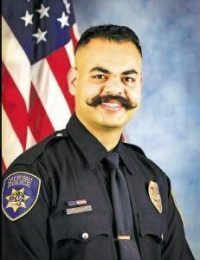 At approximately 4:35am on Sunday, August 22, 2021, Galt Police Officers Harminder Grewal and Kapri Herrera were traveling northbound on Highway 99 on their way to assist with the Caldor Fire in El Dorado County. Just north of Dillard Road in Sacramento County, a Dodge Ram pickup truck traveling southbound on Highway 99 hit the center median, broke through a barrier and entered the northbound lanes, striking the officers’ patrol vehicle head-on. Both officers had to be extricated from the vehicle and were transported to the hospital in critical condition. The pickup driver was pronounced deceased at the scene by fire personnel. Two other passengers in the pickup, both 26-year-old men, were hospitalized with injuries described as moderate. The CHP said it was not known whether drugs or alcohol played a role in the collision.

Tragically, Officer Grewal’s injuries were not survivable and he passed away on Thursday, August 26th. Officer Herrera was most recently listed in critical, but stable condition.

Officer Grewal was a 2½ year veteran of the Galt Police Department. He is survived by his parents, brother, and a countless number of family, friends, and loved ones.