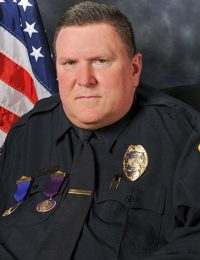 The suspect was shot by officers and later died.  The surviving officer credits Officer Dan Walters with saving his life.

Officer Walters remained paralyzed and had to endure countless surgeries and medical procedures to address a multitude of medical issues arising from the original injuries.  Tragically, on April 23, 2020, Officer Dan Walters succumbed to complications from the injuries he sustained on November 12, 2003.