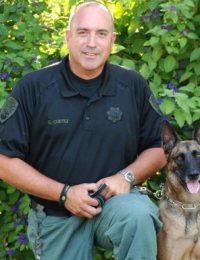 On the morning of March 25, 2013, Officer Gilbert Cortez was part of a convoy of CDCR K9 officers en route to initiate a strategic search mission for illegal drugs and contraband at the La Cima Fire Camp in rural San Diego County. He was leading four other K-9 teams in separate vehicles driving south on State Highway 79 when his marked unit veered off the roadway, struck a large boulder and overturned, killing K9 Mattie instantly. Officer Cortez was critically wounded, but survived the crash. He was transported by ambulance to a local fire station where a medevac-landing zone had been set up. Tragically, Officer Cortez passed away before the medevac helicopter could reach him.

Officer Cortez, age 46, started his career at CDCR in 1990 at the California Institution for Men. The next year, he transferred to Calipatria State Prison where he was assigned to the Investigative Services Unit and promoted to the rank of Sergeant. In 2001, Cortez was transferred to CRC where he subsequently completed K-9 training.

On April 9, 2014, hundreds gathered at Grove Community Church in Riverside to say goodbye to Officer Gilbert Cortez. Bagpipers led the procession into the church as uniformed officers, including four K9 teams, stood in rows saluting silently.

Cortez was born in Santa Ana in 1966, the youngest of six children. He attended Norco High School and was a pitcher for the baseball team. He played baseball all his life — with amateur teams at the department of corrections — and he coached Little League.

He was remembered as an upbeat, positive man. “He was always happy, always encouraging. He was one of the greatest guys,” said Reggie Diamond, a colleague of Cortez’s for more than three years.

Cortez’s partner, Officer Mike Vega, said he was like a brother and he trusted him every day with his life. “You need somebody to watch your back at all times…you need to know somebody’s there for you when you go into harm’s way,” Vega said. “Gilbert was that person for me.”

Marisa Cortez, Officer Cortez’s daughter, bravely addressed the congregation. “I’ll miss hearing him pull up in his K9 car and his voice telling Mattie to go in the back yard,” she told the crowd, her voice shaking.

Officer Cortez is survived by his wife Nohema; their two children, Andy and Marisa; his parents, Salud and Esperanza Cortez; sisters Irma Cortes, Martha Ruiz, and Sandra Ruiz; brother Saul Cortez. He was preceded in death by his sister Ortensia Sandoval.