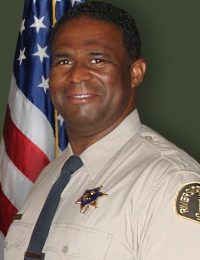 In the early morning hours of April 2, 2020, Deputy Terrell Young, a 15-year veteran of the Riverside Sheriff’s Department, passed away from complications related to the COVID-19 virus.

Deputy Young had been assigned to the Cois Byrd Detention Center in Murrieta.  At the time, 18 inmates tested positive for COVID-19.  During the week of March 16, 2020 Deputy Young escorted a COVID-19 positive inmate to the Riverside University Health System Medical Center in Moreno Valley. Deputy Young returned the inmate to his cell at the detention center that same day. On March 22, Deputy Young arrived at his work station at the jail and fell ill, reporting a fever.  On March 26, Deputy Young was diagnosed as COVID-19 positive.  On March 27, Deputy Young was admitted to the intensive care unit at Loma Linda Hospital in Murrieta with complaints of respiratory distress.  He was subsequently diagnosed with respiratory failure and placed on a mechanical ventilator. On April 2, Deputy Young developed bradycardia.  Although ICU personnel attempted advanced lifesaving measures, Deputy Young tragically passed away at 0330.

Deputy Terrell Young, age 52, is survived by his wife of 31 years and four children.