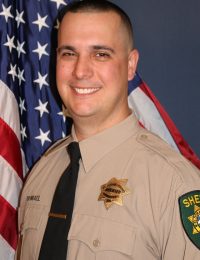 In the early morning hours of Wednesday, October 23, 2019, the El Dorado County Sheriff’s Office received a request for service for suspected theft at a residential marijuana grow in the area of Sand Ridge Road and Mt. Aukumn Road in Somerset.  Deputy Brian Ishmael responded to the call and was immediately ambushed and struck by gunfire.  Deputy Ishmael’s ride-along, an off-duty Deputy from the San Joaquin County Sheriff’s Office, returned fire, striking one of the suspects and also taking gunfire himself.  Tragically, Deputy Ishmael’s injuries were not survivable. The SJSO Deputy underwent surgery and was released from the hospital.

The wounded male suspect was transported to the hospital and a second suspect was taken into custody as deputies continued to search the area for any remaining suspects. The investigation determined the person who requested service had a business relationship with the two suspects and was not truthful with dispatchers in his initial 911 call.  That individual was arrested and charged with murder. The other two suspects have been charged with murder and assault with a deadly weapon, and accessory to murder, respectively.

Deputy Brian Ishmael, age 37, was a 4-year veteran with the El Dorado County Sheriff’s Office and previously served two years with the Placerville Police Department. Deputy Ishmael is survived by his wife and three children.

The CAHP Credit Union has established a memorial fund for the Ishmael family:  https://cahpcu.org/DeputyBrianIshmaelMemorialFund?fbclid=IwAR0sBBLGvl2vsO6cZbLuQ2CSSrpBPCY5mDOssXan8ZLeWX3mtb2mrNN4ypg

Donations can also be sent to: