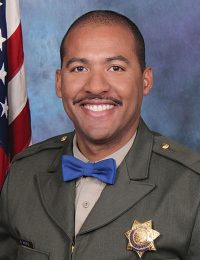 At approximately 5:37pm on Monday, August 12, 2019, Officer Andre Moye, Jr., of the CHP Riverside Area Office conducted a traffic stop on a white GMC truck in the area of Box Springs Boulevard and Eastridge Avenue, just west of Interstate 215.

During the traffic stop Officer Moye determined the truck should be impounded. As Officer Moye processed the paperwork and called for a tow, the driver returned to his vehicle, retrieved a rifle, and opened fire on Officer Moye. Despite suffering life threatening wounds, Officer Moye was able to call for backup. Three CHP officers arrived on scene and immediately engaged the suspect. Two of those officers were struck by gunfire. Riverside County Sheriff’s deputies and Riverside Police officers also responded to the scene, exchanging gunfire with the suspect. “It was a long and horrific gun battle, and resulted in a very extensive crime scene,” said Riverside Police Chief Sergio Diaz.

The suspect was killed at the scene. He was later identified as 49-year old Aaron Luther, a member of the Vagos motorcycle gang.

Officer Moye was airlifted to Riverside University Health System Medical Center. Tragically, he succumbed to his injuries in flight. The two wounded CHP officers are expected to recover.

Officer Andre Moye, age 33, was assigned to the Riverside office after graduating from the CHP Academy on March 3, 2017. He previously worked as an electrician, but had dreamed of being an officer since he was a child. He is survived by his wife, Sara, his parents, siblings, and large extended family.

Additional details and funeral information will be provided as available.