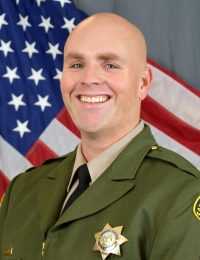 At approximately 1:30pm on Saturday, June 6, 2020, the Santa Cruz Sheriff’s Office received a call reporting a suspicious van in a turnout near Jamison Creek Road in Boulder Creek. The caller reported guns and bomb making materials were visible inside the van.

As deputies arrived on scene they witnessed the van leaving the area driven by a man later identified as Steven Carrillo. They followed the vehicle to a home on Waldeberg Road in Ben Lomond where they were ambushed by gunfire and multiple improvised explosive devices. Sergeant Damon Gutzwiller was struck by gunfire and, tragically, his injuries were not survivable. A second deputy was wounded by gunfire or shrapnel and struck by a vehicle as the suspect fled the scene. A California Highway Patrol Officer was also struck in the hand by gunfire.

Multiple responding agencies pursued Carrillo after receiving a report of a nearby carjacking. Carrillo, wounded while being placed under arrest, was treated at the hospital and released into custody. He will be charged with the first-degree murder of Sergeant Damon Gutzwiller and multiple additional felonies.

Sergeant Damon Gutzwiller, age 38, was a 14-year veteran of Santa Cruz Co. Sheriff’s Office currently serving as a Patrol Supervisor. Sheriff Jim Hart described him as courageous, intelligent, sensitive, and a caring man. Sergeant Gutzwiller is survived by his wife and their young child. His wife is pregnant with their second child.