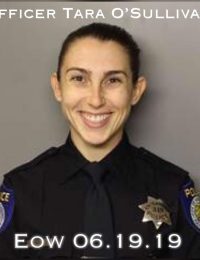 On Wednesday, June 19, 2019, Sacramento Police Department Officers received reports of a domestic disturbance between a man and a woman at a home in north Sacramento near Edgewater Road and Redwood Avenue.  Later that afternoon officers were assisting the woman with retrieving her belongings from the home when at approximately 6:10pm the man entered the home and opened fire with a rifle. Officer Tara O’Sullivan was struck and went down in a yard. Other officers on scene were forced to take cover and could not immediately get to Officer O’Sullivan. An armored vehicle was dispatched to assist and Officer O’Sullivan was transported to UC Davis Medical Center, where despite heroic efforts by all, she succumbed to her injuries.

A standoff ensued into the early morning hours of June 20th with the suspect firing at officers numerous times before ultimately surrendering.

Officer O’Sullivan, age 26, was part of the first class of graduates of Sacramento State’s Law Enforcement Candidate Scholars program in 2017. She then joined the Sacramento Police Department in January 2018 and was accepted into the police academy in July 2018, She graduated from the academy in December 2018.