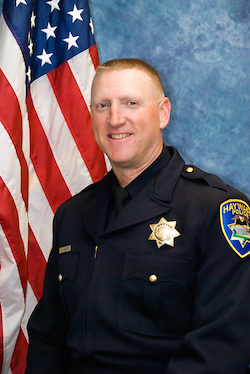 At approximately 3:15am on Wednesday, July 22, Sergeant Scott Lunger and his partner performed a traffic stop on the driver of a white Chevrolet pick-up truck swerving and driving erratically near Myrtle and Lion Streets in Hayward. Initially the driver refused to yield but eventually came to a stop at Lion and Kiwanis Streets. As Sergeant Lunger approached the vehicle, the driver opened fire without warning and sped away. Sergeant Lunger’s partner returned fire and radioed ‘shots fired – officer down, partner down’. Sergeant Lunger was transported to Eden Medical Center in Castro Valley but tragically did not survive.

A short time later the suspect’s truck was found abandoned in East Oakland. The truck was registered to Mark Anthony Estrada (21) of Oakland, who that morning had checked into San Leandro Hospital in Oakland with multiple gunshot wounds. Estrada, suspected to have gang affiliations, was arrested that afternoon.

A 15-year veteran, Sergeant Lunger (48) had been serving Hayward PD as Patrol Sergeant. Previously he was a member and leader of their SWAT team and also served in the gang unit. Sergeant Lunger is survived by two adult daughters.