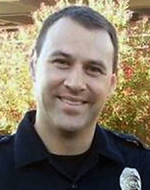 At approximately 2:00am on May 28, 2014, Officer Scott Hewell and his partner were responding to assist a fellow officer performing a felony vehicle stop on a shooting suspect. Officer Hewell and his partner were traveling on El Dorado Street near Jamestown when their patrol vehicle struck a center median curb, spun out of control and struck a tree. The primary impact was on the passenger side door, adjacent to Officer Hewell. Fire Department first responders used the Jaws of Life to extricate both officers from the patrol vehicle. Officer Hewell sustained serious head and upper body injuries. His partner was treated and released from the hospital that same day.

Officer Hewell was released from the hospital on June 6, to continue recuperation at home. On June 11, his condition suddenly deteriorated and he was rushed via ambulance to UC Davis Medical Center where he succumbed to his injuries.

Officer Scott Hewell, age 33, joined the Stockton Police Department following his graduation from the Sacramento Police Department’s Basic Police Academy. He was sworn in on September 4, 2012.

Funeral services were held on June 19 at the Christian Life Center in north Stockton, after which the procession traveled to Stockton City Hall for a final salute.

Officer Hewell is survived by his parents and siblings.