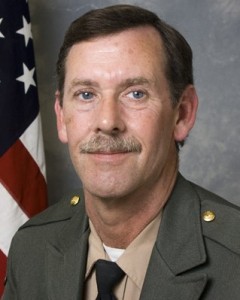 The Ballantyne family requests that in lieu of flowers, Deputy Ballantyne's memory be honored by a gift to the Tulare County Deputy Sherriff's Benevolent Fund for the creation of a POST Scholarship in his memory. Checks can be mailed to Tulare County Deputy Sheriff's Association, 704 W. Main St., Visalia, CA 93291. For more details, contact the TCDSA at 559-636-1199.

At approximately 4:15 p.m. on February 10, 2016, Tulare County Sheriff’s Deputy Scott Ballantyne and civilian Sheriff’s Pilot James Chavez were killed when their single-engine plane, “Sheriff One,” crashed near Eagle Feather Trading Post and Highway 190. Prior to the crash, the men had flown out to assist deputies on the ground who were tracking a suspect.

The sheriff’s office received a call at approximately 3:25pm regarding a man brandishing a weapon in the 27500 block of Avenue 146 in East Porterville. Two patrol units responded to the scene but the male suspect and female driver had fled. A third deputy found their vehicle and, after a short pursuit, arrested both suspects approximately 25 minutes after the initial call. Because the arresting deputy was out of radio range, Sheriff One was dispatched to assist in locating the patrol unit and suspects. The plane was already in the area of Highway 198 and Road 182 at the time. After ensuring their deputy was safe, Ballantyne and Chavez were leaving the area when their plane suddenly crashed into a hillside, erupting in flames. Tulare County Sheriff Mike Boudreaux reported no distress call had been sent and the plane’s parachutes had not been deployed. At this time it is unclear what caused the crash. The Federal Aviation Administration and National Transportation Safety Board are investigating.

James Chavez was a veteran military pilot who had flown Black Hawk helicopters and served with the California National Air Guard.

Deputy Scott Ballantyne, age 52, was a 26-year veteran of the Tulare County Sheriff’s Office. In 2014 he was assigned to HQ Patrol as Deputy Observer for Sheriff One. He is survived by his mother and sister.