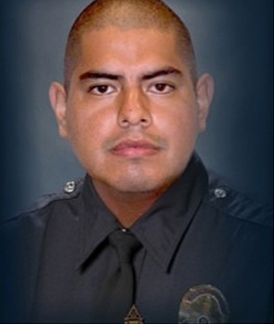 Donations in memory of Officer Sanchez can be made at the Los Angeles Police Federal Credit Union, P.O. Box 10188, Van Nuys, CA 91410. Checks should be sent payable to "Blue Ribbon Trust for Roberto Sanchez".

At approximately 3:55 a.m. on Saturday, May 3, 2014, LAPD Officer Roberto Sanchez and his partner were in pursuit of a Chevrolet Camaro whose driver committed a traffic violation. Both vehicles were traveling east on Anaheim Street in Harbor City and made u-turns at Senator Avenue, at which point the patrol car was struck broadside on the driver’s side by a Chevrolet Tahoe. The driver of the Tahoe, later identified as 20-year-old Mynor Enrique Varela of Los Angeles, fled the scene on foot.

The patrol car was so heavily damaged the radio was unusable. Officer Sanchez’s patrol partner and best friend, Officer Richard Medina, used his cellphone to call for assistance. Responding firefighters had to extricate both officers from the vehicle. Tragically, Officer Sanchez’s injuries were not survivable and he passed away at Harbor UCLA Medical Center. Officer Medina suffered a broken jaw and other serious injuries.
Varela was later arrested and charged with murder, vehicular manslaughter, leaving the scene of an accident, and two counts assaulting a peace officer. The criminal complaint also included an allegation of second-degree murder of a peace officer engaged in the performance of his duties, which can carry a sentence of life in prison without the possibility of parole.