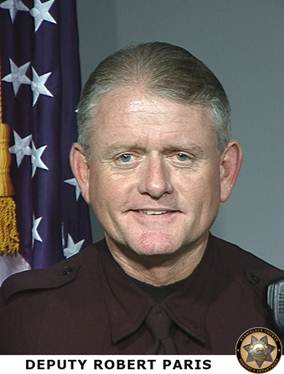 A memorial trust for Deputy Paris’ family has been established as follows:

At approximately 11:00 a.m. on Thursday, April 12, 2012, two Stanislaus County Deputy Sheriffs arrived at a fourplex residence in the 2100 block of Chrysler Drive in Modesto to serve an eviction notice, reportedly accompanied by a civilian locksmith.  As they were attempting service, an occupant of the residence opened fire, striking and mortally wounding Deputy Robert Paris and the civilian, later identified as 35 year old Glendon Engert.  The second deputy was not wounded and reportedly returned fire.  The suspect barricaded himself in the residence and a standoff ensued.  Law enforcement from throughout the region responded and the neighborhood was evacuated.

Later that night a fire erupted, destroying the home.  The body of a man believed to be the murder suspect was found in the charred ruins of the fourplex. Investigators said they found evidence that suggests the gunman was prepared for an armed confrontation with police, including numerous weapons and equipment, a high-powered assault rifle, ammunition, a gas mask, and police-style radios.  The gunman was also wearing a ballistic vest.

Deputy Paris, age 53, was a 16 year veteran of the Stanislaus County Sheriff’s Department.  He is survived by his parents, brother, sister, and two adult children.  Paris was hired at the department as a reserve deputy in May 1996, and he became a full-time employee in August 1998. He was a graduate of Tracy High School and the Ray Simon Criminal Justice Training Center in Modesto.  Stanislaus County Sheriff Adam Christianson said Paris had strong interpersonal skills and fit well in a variety of positions. “He was a compassionate, caring individual who always put others’ needs before his own,” Christianson said. “He was a good deputy. He just loved serving the community.”