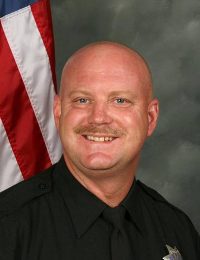 On August 30, 2017, at approximately 9:30am, members of the Sacramento County Auto Theft Task Force were conducting an investigation near the Ramada Inn located in the 2600 block of Auburn Boulevard in Sacramento. The task force is comprised of investigators from the California Highway Patrol, Sacramento County Sheriff’s Department, and Sacramento County Probation Department. Investigators located a stolen vehicle in the parking lot of the Ramada Inn. Two adult females entered the car. Officers attempted a vehicle stop on the suspect car, when a pursuit ensued. The pursuit terminated in Elk Grove, and both females were detained.  Detectives found that one female suspect was on searchable probation out of the bay area, and registered to a room at the Ramada Inn. Detectives returned to the Ramada Inn to search the room.  As investigators knocked and announced themselves, a male suspect inside opened fire, shooting two CHP officers through the door. Both are expected to recover.

The suspect then fired rounds from the balcony at deputies stationed at the rear of the hotel. Sacramento County Deputy Sheriff Robert “Bob” French was struck in the exchange. The suspect escaped in a vehicle and a pursuit ensued. The suspect crashed the vehicle just west of Watt Avenue, and again engaged pursuing officers. The suspect was struck by gunfire and detained.

Deputy Bob French, age 52, a 21-year veteran of the Sacramento County Sheriff’s Department, died as he was being transported to the hospital. He was a highly respected training officer with the North Area Patrol Unit.

Deputy French is survived by three adult children, grandchildren, his sister, and his girlfriend.