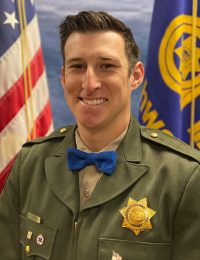 On November 23, 2020, at approximately 7:05 pm, Officer Andy Ornelas of the CHP Antelope Valley Area Office was responding to assist with a traffic collision on SR-14. While on his way to the scene, a motorist pulled from the right shoulder to make a U-turn directly in his path. Officer Ornelas’ motorcycle struck the other vehicle causing him to be thrown from his motorcycle. Officer Ornelas sustained multiple injuries and was transported to Antelope Valley Hospital in critical condition.

Despite significant life-saving efforts by medical personnel, on Wednesday, December 2, 2020, Officer Ornelas succumbed to his injuries.

Officer Ornelas, age 27, was a four-year veteran of the Department. He had been assigned to the Antelope Valley Area since December 2019. He followed in the footsteps of his mother, Kellie, who is a retired CHP officer from the same Antelope Valley Area office, and his father, Arturo, a motorcycle officer with the Los Angeles Police Department. He is survived by his wife, Taylor; a brother, Cody, who is a CHP officer assigned to the Central Los Angeles Area office; his sister, Nikki; and an uncle, retired CHP Captain Andreas Ornelas.

A memorial fund has been set up through the CAHP Credit Union. You can make donations on their website, or mail a check to: