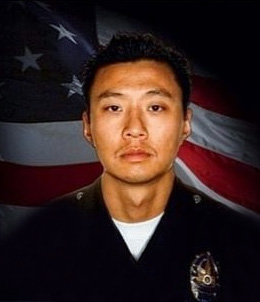 On the morning of Friday, March 7, 2014, at approximately 8:00am, LAPD Officer Nicholas Lee and his partner were responding to an “unknown trouble” radio call in the City of Los Angeles when a big-rig truck lost control and collided with their patrol car at Robert Lane and Loma Vista Drive in Beverly Hills. A preliminary investigation indicated the truck’s brakes may have failed.

Los Angeles Fire Department personnel responded to the scene and pronounced Officer Lee deceased at the scene. His partner, a recent graduate of the police academy, was transported to a local hospital in critical condition. The driver of the truck was also transported to the hospital in critical condition. Both Officer Lee’s partner officer and the truck driver are expected to survive their injuries.

Officer Lee, age 40, was a 16 year veteran of the Department, having received over 70 commendations throughout his career. He is survived by his wife and two young daughters.