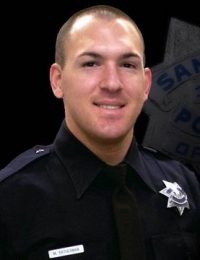 An account has been set up to assist the Katherman family. Checks can be made to SJPOACF and mailed to the San Jose POA Office at: 1151 N. 4th St., San Jose, CA 95112.

At approximately 4:22 p.m. on Tuesday, June 14, 2016, Officer Michael Katherman of the San Jose Police Department was on patrol riding his department-issued motorcycle northbound on 10th Street when he collided with a silver minivan turning left onto Horning Street. Witnesses performed CPR on Officer Katherman and used his radio to call for assistance. The driver of the minivan remained on scene. Drugs or alcohol use were not suspected of the driver, who was not taken into custody. Officer Katherman was rushed to Regional Medical Center where, despite every effort of medical personnel, he succumbed to his injuries.

Officer Katherman served with the San Jose Police Department for 11 years. He is survived by his wife and two school-age sons.