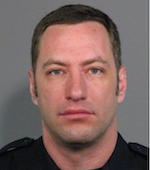 The San Jose Police Officers’ Association has set up a memorial fund for Officer Johnson’s family. Donations can be made online or mailed to: SJPOACF, 1151 N. 4th Street, San Jose, CA 95112. In the memo line please write "Michael Johnson".

At approximately 6:48 p.m. on Tuesday, March 24, San Jose Police Officers responded to a call in East San Jose regarding an intoxicated, possibly suicidal man who assaulted a female family member. As the three officers approached the apartment building in the 2600 block of Senter Road, they were fired upon without warning from a balcony by a male subject with a high-powered rifle. San Jose PD Officer Michael Johnson was struck and fatally wounded. The other officers immediately returned fire and the suspect disappeared behind the enclosed balcony.

A massive manhunt ensued with the SJPD MERGE unit and assistance from neighboring law enforcement agencies, including a CHP helicopter. Officials believed the suspect was still inside the apartment, but were also investigating leads that indicated he might be elsewhere. Shortly before 3:30am Wednesday, officers confirmed the suspect, 57-year-old Scott Dunham, was found deceased on his balcony. The investigation concluded Dunham was shot and killed by Officer Johnson’s partner, Officer Douglas Potwora, a 16-year SJPD veteran.

Officer Michael Johnson is the 12th San Jose PD officer killed in the department’s 166-year history. He was a 14-year veteran and field training officer at the time of his death. He is survived by his wife, parents, and sister.