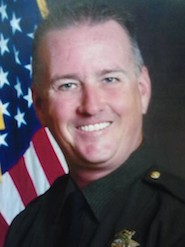 A memorial fund for Michael’s four children has been set up at Wells Fargo Bank. The account is the “Detective Michael Davis, Jr., Benefit Memorial Fund,” account number 2348924032. Checks can be sent to Wells Fargo Bank, 3680 Taylor Road, Loomis, CA 95650.

On the afternoon of Friday, October 24, 2014, Placer County Sheriff’s Detective Michael Davis, Jr. and his partner Deputy Jeff Davis (no relation) were taking part in a massive manhunt after an incident unfolded earlier that morning in which Sacramento Sheriff’s Deputy Danny Oliver was shot and killed while investigating a suspicious occupied vehicle in Sacramento’s Arden area.

The suspects fled after murdering Deputy Oliver, carjacked several vehicles in Sacramento County, shooting and critically injuring a civilian, then travelled east up Interstate 80, exiting at the city of Auburn in Placer County. Detective Davis and Deputy Davis spotted the suspects pulled over to the side of the road and approached the vehicle. The male suspect immediately opened fire with an AR-15 rifle, striking both officers. Both officers were transported to Sutter Roseville Medical Center, where Deputy Jeff Davis was treated and released. Tragically, Detective Michael Davis, Jr., did not survive his injuries.

The female suspect, identified as Jannelle Monroy, 38, was taken into custody at an Auburn city park. The male suspect, 34-year-old Marcelo Marquez (aka: Luis Enrique Monroy-Bracamonte) fled into a residential area near Placer High School, forcing that school and others to lock down their campuses. The manhunt concluded at approximately 4:00pm when Marquez was taken into custody after deputies converged on a home on Belmont Street in Auburn, where he was holed up.

Detective Michael Davis, Jr. is survived by his wife and four children. He is a 15 year veteran of the department who was five days away from his 43rd birthday.

Detective Davis’ father, Michael D. Davis Sr., was a Riverside sheriff’s deputy killed in the line of duty when his helicopter crashed during a narcotics task force operation on October 24, 1988, exactly 26 years earlier to the day.