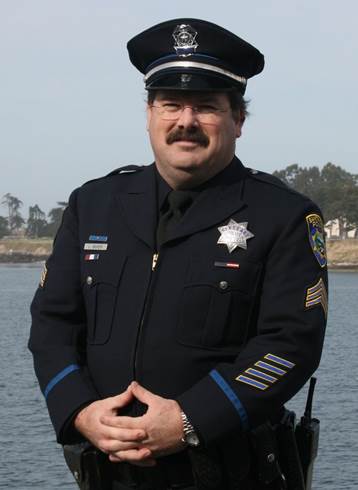 A memorial fund has been established for the Baker and Butler families. Donations can be made at any Wells Fargo bank to the Baker-Butler Scholarship Fund, Account #9992451154

Checks can be mailed to:

Sgt. Baker and Det. Butler made contact with suspect Jeremy Peter Goulet of Santa Cruz through the front door of Goulet’s home on North Branciforte Avenue, but he refused to come outside. The suspect then exited his home through another door and surprised the officers, shooting them with a .45-caliber handgun registered in his name. Goulet then stole their service weapons, along with Baker’s vehicle and the body armor within the vehicle.

Responding officers set up a perimeter, and a multi-agency team secured the North Branciforte area. Trapped by officers, Goulet abandoned the vehicle and fled on foot back toward his home. A gun battle ensued, with Goulet firing two handguns, hitting a firetruck, sending firefighters, medical personnel, and civilians scrambling. Three Santa Cruz police officers and a Santa Cruz sheriff’s deputy returned fire, killing Goulet. Authorities discovered Goulet was wearing body armor and had three guns in his possession. The 35-year-old Goulet had a long history of run-ins with the law, was a suspect in the sexual battery of a girl and a rape in Hawaii, and had airline tickets for a flight to New Mexico.

Sergeant Baker, a 28-year veteran, is survived by his wife Kelly, daughters Jillian and Ashley, and son Adam who is a community service officer with the Santa Cruz Police Department.

Detective Butler, a 10-year veteran, is survived by her partner Peter Wu and their sons Joaquin and Stellan, ages 5 and 2.

This is the first loss “In the Line of Duty” suffered by the Santa Cruz Police Department in its 150 year history.