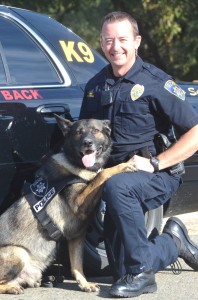 The Galt Police Officers Association has set up the following memorial fund:

On January 15, 2013, at approximately 1130 hours, Galt Police Officers were called to a burglary in progress at an apartment complex in the 200 block of F Street. Officer Kevin Tonn, age 35, was waived down by a citizen at the complex who had just then spotted a man matching the suspect description walking near railroad tracks in a nearby field. Officer Tonn made contact with the male subject and an altercation ensued. The suspect pulled a handgun from his person and fired one shot, striking and mortally wounding Officer Tonn. A second officer who had just arrived on scene witnessed the shooting, called for assistance, and gave chase. Gunfire was exchanged as a third officer arrived on scene. Neither responding officers were wounded and the suspect then used his handgun to take his own life.

Officer Tonn was transported to Kaiser Permanente South Medical Center, where tragically he was pronounced deceased. He is survived by his parents and many family members, including his K-9 partner “Yaro.”

A native of Roseville, CA, Officer Kevin Tonn was a 3 ½ year veteran of Galt Police Department. Prior to his tenure with Galt PD, he served as an MPO in the United States Army. As a civilian he served as an Emergency Medical Technician, a firefighter and fire inspector, before returning to law enforcement.