Two memorial funds have been established to assist the family of Officer Youngstrom:

Checks payable to "For Benefit of Officer Kenyon Youngstrom" can be mailed to:

Wire transfers can be sent to routing number 121102036 and addressed "For Officer Kenyon Youngstrom."

On September 4, 2012, at approximately 0820 hours, Officer Kenyon Youngstrom of the CHP Contra Costa command was on patrol on I-680 southbound. He had just completed an enforcement stop on a motorist when his beat partner, Officer Tyler Carlton, advised Officer Youngstrom he was approaching Youngstrom’s location, following a motorist driving a Jeep on which he intended to initiate an enforcement stop.

Officer Youngstrom was transported to John Muir Medical Center in Walnut Creek, with life threatening injuries. On Wednesday, September 6 at 1805 hours, Officer Youngstrom, age 37, was pronounced deceased with his family by his side. He is survived by his wife Karen, and four children ages 5 to 17; his parents, Gaylord and Jill Youngstrom of Riverside, CA.; four brothers and a sister. 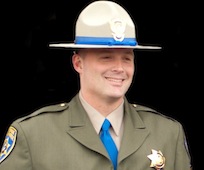 Officer Youngstrom entered the CHP Academy in August 2005, and was assigned to the CHP’s Contra Costa Area upon graduation in February 2006. He transferred to the CHP’s Golden Gate Division headquarters in January 2009, and had transferred back to the Contra Costa Area office on August 1, 2012. He served in the U.S. Army Reserves from 1994 to 2000, achieving the rank of Specialist.

Officer Kenyon Youngstrom is survived by his wife Karen, and four children ages 5 to 17; his parents, Gaylord and Jill Youngstrom of Riverside, CA.; four brothers and a sister.