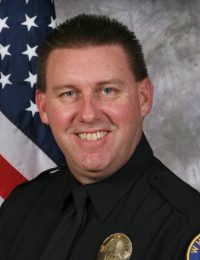 At approximately 8:30am on Sunday, February 20, 2017, Whittier police officers responded to a traffic collision in the area of Colima Road and Mar Vista Street in Whittier.  Reportedly, one vehicle had rear-ended multiple vehicles.  When officers arrived on scene the victims stated the suspect had pushed his vehicle around the corner.  Officers made contact with the suspect and as they moved to pat him down the suspect produced a hand gun and opened fire, striking both officers. At least one officer returned fire, striking the suspect. Both officers were rushed to UC Irvine Medical Center. Tragically, Officer Keith Boyer did not survive. His partner was last listed in stable condition in the ICU.

It was later learned the suspect, a 26 year old known gang member, had been released on parole 10 days prior and was driving a stolen vehicle. The investigation is on-going.

Officer Keith Boyer, age 53, was a 27-year veteran of the Whittier Police Department.  He is survived by his children and parents.