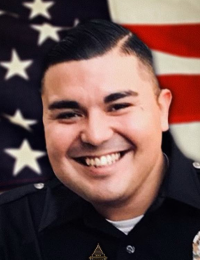 On the evening of February 26, 2021, Officer Jose Anzora of the Los Angeles Police Department was struck by a car while directing traffic on foot at the scene of vehicle collision near Martin Luther King Jr. Boulevard and Woodlawn Avenue.  Officer Anzora was rushed to a hospital in critical condition, where he remained until his passing on March 3rd. The driver who struck Anzora remained on scene and cooperated with the investigation.

Officer Anzora, age 31, began protecting and serving the people of Los Angeles in 2011, most recently in Newton Area, where he spent the majority of his career.  He is survived by his wife, Heather, his mother, and extended family.