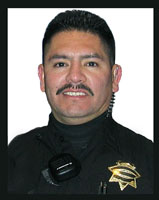 On the evening of Sunday, June15th, the Davis Police Department put out a ‘be on the lookout’ for Marco Topete who was reportedly driving under the influence with a child in the vehicle.

At approximately 9:30 p.m. Deputy Jose Antonio Diaz located the vehicle and attempted to stop it, but it failed to yield. Deputy Diaz pursued the vehicle into the town of Dunnigan, where it stopped on County Road 5 near County Road 99W.

After the stop Deputy Diaz called for emergency backup reporting he had been shot. The suspect, Marco Antonio Topete, age 35 of Arbuckle, fled on foot. A short time later backup deputies, fire units, and AMR arrived on scene. Deputy Diaz was transported to Woodland Memorial Hospital where despite aggressive CPR efforts he died of his wounds at 10:55 p.m.

A massive search for the suspect was conducted by the Sheriff’s Department with the assistance of ground, K-9, SWAT, and air units from the FBI, California Highway Patrol, Sacramento, Colusa, and Sutter Counties, and from the West Sacramento, Davis, Woodland, Winters, and UC Davis Police Departments.

At approximately 8:00 a.m. the next day Marco Topete was found by the Yolo County SWAT team and arrested without incident near County Road 88 and County Road 4. Topete is a known gang member and parolee with a record of assault with a deadly weapon. He is accused of firing multiple rounds from a high-powered AR-15 rifle at Diaz’s patrol car, and was charged with first degree murder.

Hundreds of law enforcement personnel from across California came to the UC Davis ARC Pavilion on June 27th to honor their fallen colleague. They joined family members and friends in remembering Tony Diaz.

Jose Antonio Diaz, 37, was born in Mexico and moved to the Dixon area when he was 4. He graduated from Dixon High School and eventually got a job as computer technician with Yolo County. Along the way, Diaz fathered three daughters and was soon to be married to his fiancee. Yolo County Sheriff Ed Prieto said Diaz had shown an intense interest in becoming a

Yolo County deputy and put himself through school to get there. Diaz was eventually appointed to service in 2004 and impressed his colleagues with his professionalism. Sergeant Al Williams served as Diaz’s supervisor and was also responsible for recruiting him out of the academy. Williams said the word “privilege” best described his relations with Diaz, which, like all privileges, can be taken away. “I had the privilege of processing Tony’s application. I had the privilege to work with Tony,” Williams said. “(And) each of us lost that privilege to be with Tony.”

“In an instant, many lives were turned upside down,” Sheriff Prieto said during the ceremony. Prieto announced Diaz will be posthumously awarded the Gold Medal of Valor, the highest award for deputy service. “He didn’t get it because he followed a suspect,” Prieto said. “It’s because even though he was mortally wounded he didn’t back down.” After being shot, despite bleeding heavily and suffering intense pain, Diaz managed to tell back-up officers which direction his assailant had fled. “He chose to defend the lives of the defenseless,” Prieto said. “Courage is not the absence of fear but rather the judgment that something else is more important.” Prieto called Diaz a warrior.