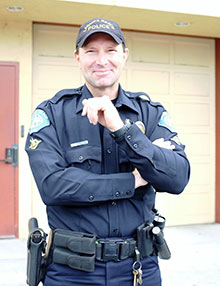 At approximately 11:30pm on Saturday, September 21, just 30 minutes prior to finishing his shift, Laguna Beach Motor Officer Jon Coutchie was traveling northbound on Coast Highway, responding to a call of a speeding motorist who had evaded another officer. While attempting to locate the speeding vehicle, Jon was involved in a collision with a Chevrolet pickup truck in the intersection with Cleo Street. Citizens rushed to assist the fallen officer. “As soon as I saw him go down, I ran up to help the poor guy and he was already lifeless,” witness Ian Paul said. Paul, who was walking in the area at the time, said he stayed with the officer as another citizen administered CPR. Fellow officers quickly responded and after finding Officer Coutchie had tragically succumbed to his injuries, one officer ran to a local supermarket for an American Flag. Officer Coutchie’s body was draped in that American Flag as an honor to his sacrifice as an Army Ranger and Laguna Beach Police Officer.

Officer Coutchie was born in Tucson, Arizona on October 2, 1971, and raised in Orange County where he graduated from Laguna Hills High School in 1989. After the September 11th terrorist attacks, Officer Coutchie enlisted in the military and became an Army Ranger. He served his country from 2003-2007 and completed tours of duty in Iraq and Afghanistan.

Officer Jon Coutchie is survived by his mother, father, brother, step-sister, and girlfriend.

This is Laguna Beach PD’s first line-of-duty death since 1953.