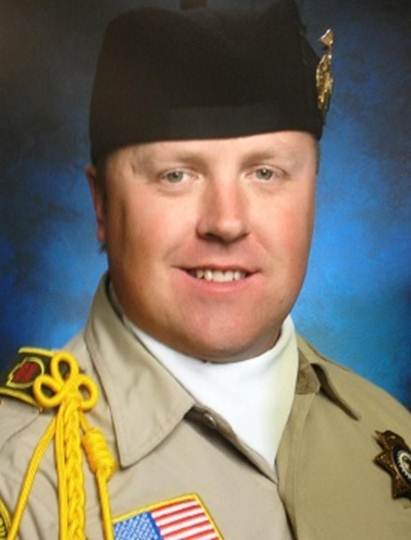 A memorial fund has been established for the MacKay family. 100% of all monies collected will be given to the family.

San Bernardino County Sheriff’s Department Detective Jeremiah MacKay was part of multi-agency tactical operation assigned to apprehend a fugitive wanted for the murders of two civilians on February 3, and a Riverside Police Officer on February 7.

At approximately 12:22 p.m. on February 12, a report came in that a person matching the suspect’s description had stolen a vehicle from a home near the ski resort area of Big Bear. Responding officers pursued the suspect who eventually fled a second stolen vehicle and barricaded himself inside a nearby cabin. A massive gun battle erupted and two deputies were shot. Both were airlifted to Loma Linda University Hospital, where officials later confirmed Detective Jeremiah MacKay had succumbed to his injuries. The second deputy underwent surgery and is expected to survive.

Detective Jeremiah MacKay, age 35, began his career with the San Bernardino County Sheriff’s Department in 1998 as a Deputy Sheriff. The 14-year veteran worked patrol at the Twin Peaks and Central Stations. In 2006 he was promoted to Detective and assigned to the Training Division where he taught his colleagues tactical and firearms training. His most recent assignment was at the Yucaipa Station.