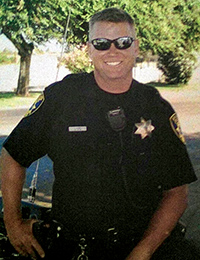 The Vallejo Police Officer’s Association has created a memorial fund on behalf of Officer James Capoot’s surviving wife and three daughters. These funds will be used to establish a trust fund in the family’s name and an account has been opened with Bank of the West’s Vallejo branch. Donations to Officer Capoot’s memorial fund can be made as follows:

On the afternoon of November 17, 2011, Vallejo PD Officer Jim Capoot was responding to a bank robbery at a North Vallejo Bank of America, when he spotted a vehicle matching the description of the vehicle involved.  A pursuit ensued until the 100 block of Janice Street where Officer Capoot executed a pit maneuver on the suspect’s vehicle.  The suspect abandoned his vehicle and Capoot gave chase on foot into a residential neighborhood.  Responding officers heard gunshots and found Officer Capoot down in the backyard of a residence.  Capoot was transported to Kaiser Permanente Medical Center, where he succumbed to his injuries.  One suspect has been arrested in this case.

Jim Capoot, age 45, began his law enforcement career with the California Highway Patrol in 1990. In 1992 he left the CHP to become a Police Officer for the City of Vallejo.  Over the course of his career, Capoot has served as a motorcycle officer, motorcycle instructor, driving instructor, force options instructor, and SWAT officer.  He has received two Vallejo Police Department Medals of Courage, two Life-Saving Medals, and various other departmental commendations.  Before beginning his career in law enforcement, Capoot served our country in the United States Marine Corps.

Officer Capoot is survived by his wife Jennifer and their three daughters, Jillian, Jamie, and Justine.  He was the fourth Vallejo officer killed in the line of the duty in the city’s 155-year history.