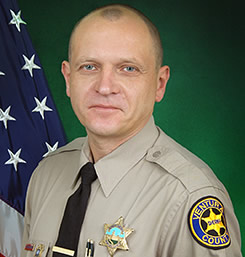 The Ventura County Deputy Sheriff’s Association has set up a memorial fund for Deputy Kostiuchenko’s family. Donations can be mailed to VCDSA FBO: Deputy Eugene Kostiuchenko, 981 S. Victoria Avenue, Ventura, CA 93003, or sent to any branch of the Ventura County Credit Union.

The driver, identified as 25-year-old Kevin Hogrefe of Camarillo, continued on at a high rate of speed before crashing off the roadway near Las Posas Road. Hogrefe was arrested by the California Highway Patrol for felony DUI.

Deputy Kostiuchenko, age 41, was an 11-year veteran who had been assigned to the Camarillo sheriff’s station. He is survived by his wife and two sons.