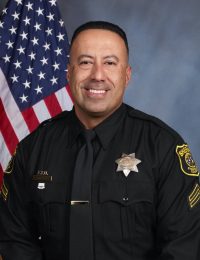 At approximately 9:48 p.m., on Sunday, November 25, 2018, Riverbank Police Services deputies were dispatched to the intersection of Oakdale Road and Patterson Road in Riverbank for a report of a driver of a silver Cadillac Escalade passed out behind the wheel. Deputies arrived and the driver of the Escalade sped off leading deputies on a pursuit. Deputies deployed spike strips on the Escalade which became disabled at the intersection of Fine Avenue and Cambridge Court in Modesto. The driver fled from the vehicle and began fighting with deputies forcing them to deploy a less-lethal bean bag to subdue him and take him into custody.

Dispatch received 911 calls of a Stanislaus County Sheriff’s Department patrol vehicle crashed into a power pole at Terminal Avenue and Claribel Road. CHP, Deputies, ambulance and fire responded to the scene in an attempt to rescue Deputy Tony Hinostroza, but tragically he died of his injuries at the scene. Deputy Hinostroza, age 45, was responding to assist Riverbank Police Services deputies on the vehicle pursuit when he collided with the power pole.

Deputy Hinostroza is survived by his adult son. Additional details and funeral information will be forwarded as available.