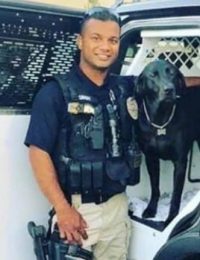 A memorial fund has been set up for the family of Corporal Singh. Donations can be made in person at any West America Bank Branch to the Corporal Ronil Singh Memorial Fund (Newman Police Department)

At approximately 12:57am, on Wednesday, December 26, 2018, Corporal Ronil Singh with the Newman Police Department called in a traffic stop at Merced Street and Eucalyptus Avenue in the city of Newman. Three minutes later he called “shots fired” over the radio. Multiple agencies responded to the scene where they found Corporal Singh suffering from gunshot wounds. He was transported to a nearby hospital, where tragically he was pronounced deceased.

At this writing the suspect is at large. A manhunt involving several agencies is underway in Stanislaus County and neighboring areas.

Corporal Singh (age 33) was a native of Fiji, employed by the Newman Police Department since July 2011. Prior to that he served with the Merced County Sheriff’s Department and Turlock Police Department. He is survived by his wife Anamika and their 5 month old child.