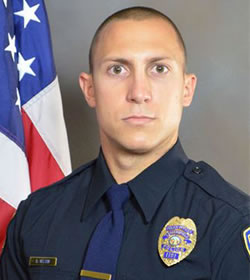 On Saturday evening, June 27, a male 32-year old driver and apparent sole occupant of the silver Hyundai was arrested.

Officer David Nelson is the first Bakersfield Police officer to be killed in the line of duty since Officer William Leonard Sikola who was also killed in a vehicle pursuit in 1983. Officer Nelson, 26, was a 2-year veteran with the Bakersfield Police Department and is survived by his parents and siblings.