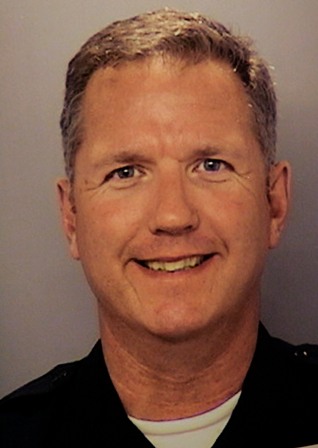 On October 27, 2010, around 11:00 pm, US Marshals and SD County Probation went to serve an arrest warrant at an apartment complex in the Skyline area of Southeast San Diego. They were looking for a suspect wanted for assault with a deadly weapon (245 PC) charges. When County Probation made contact at the door, the subjects closed the door on the Marshals and Probation Officers. The apartment door was kicked in and the subject of the warrant was arrested. At the same time there was a male and female who ran for a back bedroom and barricaded themselves inside. The US Marshals and County Probation Officers removed the other female and an additional male from the apartment, set up a perimeter, and called San Diego PD for assistance. A total of six SDPD Officers, including a SDPD Officer and his K-9 partner, went into the apartment in an attempt to get the male and female out of the bedroom. When there was no response, SDPD Officers started to kick in the bedroom door and were met with gun fire. SDPD Officers returned fire. Officer Christopher Wilson was shot in the head, the K-9 was shot in the face. Two of the officers carried Wilson out of the apartment, the K-9 Officer removed his partner from the apartment, and the other two officers barricaded themselves in another bedroom for cover.

Officer Wilson was transported to Scripps Mercy Hospital, where doctors, knowing the injuries to him were catastrophic, kept him alive until family members could be brought to the hospital. Officer Wilson succumbed to his injuries at approximately 0255 hours of the morning of October 28.

The other two officers were able to escape out of the second story apartment through a window with the assistance of the fire department. The K-9 was transported to the emergency vet hospital, where he underwent surgery for a gun shot wound to the face. He is expected to survive.

After an 8 hour stand-off, SWAT team members made entry into the apartment and found a male and female in the bedroom, dead from apparent gun shot wounds. It is unknown if they died from shots fired by the officers or if they were self inflicted. Several guns were found around the bodies.

Officer Wilson was a 17 year member of the SDPD, was a member of the SWAT team, and a Field Training Officer. He worked out of the Southeast Division. He is survived by his ex-wife and two adult children. The ages of the children is not confirmed at this time. Officer Wilson was a veteran of the US Navy and had attained the rank of Lieutenant before leaving to join SDPD.

The San Diego Police Officers Association has set up a trust fund for Officer Wilson’s family. Checks can be made payable to the SDPOA Charity Fund. Please write “Officer Wilson” in the memo line. Any donations (100%) will go directly to the family. Donations can be mailed to SDPOA, 8388 Vickers Street, San Diego, CA 92111.