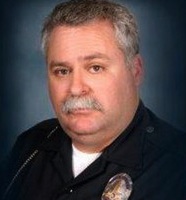 A trust fund has been established to assist the family of Officer Cortijo. Donations can be mailed to:

On the afternoon of April 9, 2014, Los Angeles Police Department Motor Officer Christopher Cortijo, age 51, passed away from injuries sustained after being struck by an impaired driver four days prior.

Officer Cortijo had just started his shift with LAPD’s Valley Traffic Division on Saturday, April 5, when the collision occurred. Officer Cortijo was stopped at a traffic light at the intersection of Saticoy Street and Lankershim Boulevard around 5:30 p.m. when a Chevrolet Blazer traveling at a high rate of speed struck him from behind. The impact pushed Officer Cortijo and his motorcycle into a Honda Accord stopped in front of him, pinning him between the two vehicles. Qaneak Cobb, the 33 year old driver of the Blazer was arrested for DUI and possession of cocaine.

Officer Cortijo was twice named Los Angeles Police Department Officer of the Year and during his 27-year career arrested over 3,000 motorists for driving under the influence. Before joining the LAPD, Officer Cortijo served in the U.S. Marine Corps.