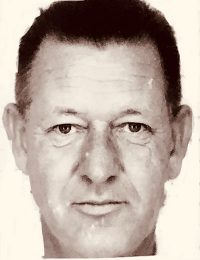 Deputy Hoyt was shot and killed in the Lake County Courthouse when three prisoners being led to a courtroom attempted to escape. The three, who were shackled to each other, attacked another deputy, grabbed his gun and opened fire. Deputy Hoyt, who was not armed, was shot in the chest. Before he collapsed he managed to stagger to a counter where he obtained a gun kept below it, and returned fire, wounding one of the prisoners. Other officers who heard the shots subdued the prisoners.