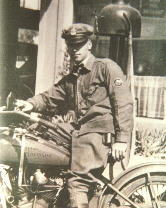 Traffic officer Dodge was riding a motorcycle on Broadway (the city’s main street) apparently after a traffic violator. The driver of an automobile traveling in the opposite direction did not see Dodge and turned in front of him. Dodge collided with the automobile and died a minutes later of his injuries.

Ofc. Dodge was 26-years-old and left behind a wife and a baby boy that was born only days after his death.