More than 1,800 fellow law enforcement officers from San Diego and around the nation came to hear a fallen colleague eulogized as a caring police officer whose boyish looks belied his determination and dedication to his job.

“I remember looking at him, and I looked at this boyish face, and I said, ‘Nobody checked his ID. You’ve got to be 21 to be a cop, because he looked so young,” said Davis’ sergeant at the Police Academy, Frank Bucheit, recalling his first meeting with Davis.

The funeral service led Police Chief Bob Burgreen to question the need for guns in American society. Davis, the youngest of three sons of an Oregon family, was shot to death Sep. 17, 1991, while responding to a domestic dispute in Southeast San Diego.

Officer Davis’ partner returned the suspect’s fire; however, the suspect fled on foot. He remained at large for several hours before being found hiding behind a vehicle in the vicinity of the crime scene. Upon being discovered, the suspect fired one round to his head, committing suicide.

The gunman, Arnaldo Devilla Castillo, 30, a former hospital housekeeping aide, killed himself after an 11-hour manhunt at the apartment complex where the shooting took place. 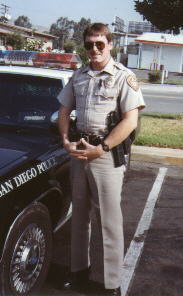 Davis has been praised by both fellow officers and residents for his role in cleaning up an apartment complex under a long-established police program called “problem-oriented policing.” He was slain at the same complex.

In an interview after the funeral, Wendy Davis said her husband and childhood sweetheart, loved his job.” “He was an officer. He was there for the people, and I think they knew that,” she told a reporter.

Also after the service, Chief Burgreen said Ron Davis “didn’t have a chance” in the incident. “There are some times when you never have a chance, and this is such a case,” the police chief said. “He stepped out of that car, and he’s not even out, and he gets shot by a man that he didn’t even know was armed.”

Burgreen went on to warn that “we have to get a handle on the guns” in the city. “I just have a generally bad feeling about the proliferation of guns, and the fact that almost anyone can get a gun at any time,” Burgreen said. “Not only can they, they are, and they are using them on innocent people. And police officers are just trying to do their jobs, and it makes me sick.

“As a society, we have to start asking ourselves, ‘What are we doing with all those guns out there, and do we really need them?”‘

Davis was born in Oregon and attended schools there. He later joined the Marines, went through the Marine Corps Recruit Depot, and was stationed at Camp Pendleton.

He was married and had two sons, one 4 and the other 18 months.

Davis graduated from the police academy in April 1990 and was presented the Hartless Spirit Award at the ceremony. Created by Shawn Dee Hartless, the award is based on four criteria, according to academy officials: leadership, inspiration, commitment, and “the unselfish desire to help others.” The winner receives an engraved flashlight.

Davis’ death ended a string of almost four years in which no San Diego police officer was killed in the line of duty. In the 1980s, when seven officers died.